Unlike Atlanta’s Ted Turner, Anniston’s Marvin Fowler didn’t own the local baseball team that was giving the marvelous game a bad name. But he’d had enough. He owned stock in the Rams, the Class B Southeastern League team in Anniston. The 1950 Rams were awful and hemorrhaging money. Couldn’t pitch. Barely hit. Fans ignored them.

Fowler, who owned an Anniston auto dealership, complained — loudly, apparently — so the team’s front office called his bluff that he could do better at managing the team. Fowler was given a one-night shot. Prove it, they told him.

But first, let’s bring in Turner.

Before he famously started CNN, Turner bought a low-budget Atlanta television station in 1969. In 1973, he bought the TV rights to Atlanta Braves games. Three years later, he bought the Braves and the NBA’s Hawks. And in 1977, his baseball team was mimicking the 1950 Anniston Rams. They were terrible.

Early in the second month of that season, the Braves dropped 16 straight and languished at the bottom of the standings at 8-21. You probably know the story from here: Brash, confident and quirky, Turner told Manager Dave Bristol to take a 10-day vacation and decided to manage the Braves himself.

On Sunday, May 11, in Pittsburgh, Turner donned a Braves uniform — No. 27 — and managed a game against the Pirates. It didn’t go well. The Braves lost, 2-1, running their losing streak to 17 games. National League President Charles Feeney put an end to Turner’s gimmick the following day.

Turner got just one day as manager.

Fowler was supposed to, but didn’t. (More on that later.)

The ’50 Rams never really had a chance, to be honest. Their franchise was nearly surrendered back to the league during the winter because of ownership and fiscal troubles. The team didn’t get its reprieve until January. After several years of affiliation with Pittsburgh, the Rams didn’t have a tie with an MLB club, essentially making them a minor-league vagabond that had to scour castoff lists of other clubs for players. And then the season started.

They lost the season-opener at Gadsden, 3-2. By May 11, they were 10-13 and in the bottom half of the standings. They won just three more times in the next 2 1/2 weeks and fell to 13-27. The lost June 2 to Pensacola, 20-3. They suffered through eight straight losses in the middle of the month. Players were shuffled in and out almost daily, especially pitchers. Three different men managed the club.

The Rams stank, and almost no one was buying tickets to Johnston Field. The league put the Rams and other struggling SEL teams on warning. Poor play and poor attendance would endanger the franchises’ future.

That’s where Marvin Fowler comes in.

“A bit of honest complaining about the way the club is being run landed Mr. Fowler right in the manager’s seat — at least for a night,” The Anniston Star newspaper reported.

More from The Star:

“The club will be under a new manager at 7:30 o’clock tonight when Marvin Fowler, local businessman, dons a uniform to see what he can do about stopping the Rams’ 11-game losing streak. Fowler got the job Friday night when he put in his complaint about the club.

“(Manager) Lou Bevil might get rolled for his job if the Rams win tonight — or maybe Lou can talk Fowler into a swap for his automobile agency.” 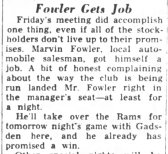 Later that afternoon, a car bringing Bevil, Rams infielder Tony Smeraglia and several others crashed with a truck on U.S. 78 between Birmingham and Anniston. Smeraglia and two others died. Bevil was severely injured. That day’s game was canceled.

The Rams played a doubleheader the following day, losing at Gadsden 13-4 in their first game after Smeraglia’s death and beating the Pilots 15-9 that night at home. Dick Wentworth, the Rams’ catcher, managed the club in Bevil’s place — meaning Fowler, unlike Ted Turner 27 years later in Atlanta, was pushed aside, complaint or not.