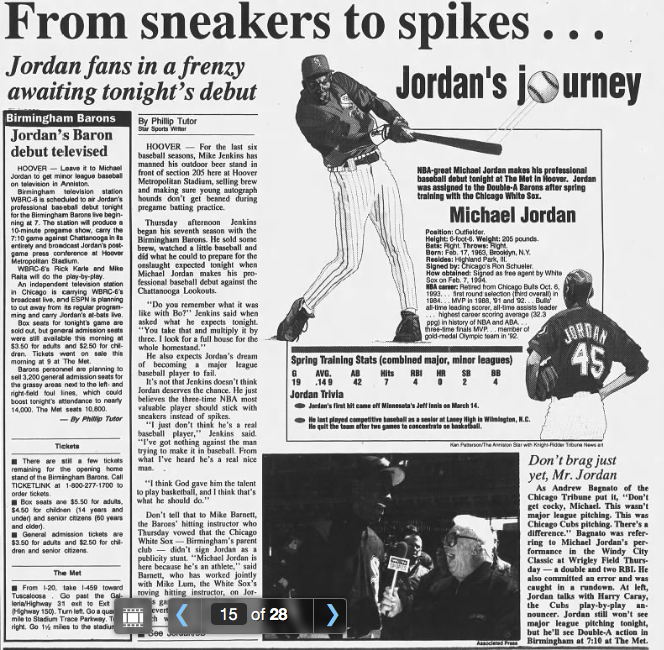 In all fairness to Michael Jordan, he didn’t play baseball. He butchered it. Lord, he tried. He tried hard. A For Effort hard. And yet, he was just another human — albeit, a spectacularly athletic human with a legendary competitive streak — who couldn’t master the art of hitting a round ball with a round bat.

In his one season with the Double-A Birmingham Barons, Jordan hit .202, slugged .266 and posted an on-base percentage of .566. Curve balls were his kryptonite. He struck out more than twice as often (114 times) as he walked (51). He made 11 errors in right field and never fully lost the habit of jumping to catch can-of-corn fly balls.

His numbers were, let’s say, underwhelming.

Nevertheless, the Barons and the city of Birmingham — as well as Hoover, Alabama, where the Barons played — loved having Jordan in the spring and summer of 1994. Jordan used his NBA and endorsement money to arrange for the JordanCruiser — a tricked-out tour bus the Barons used for road games that year. Fans in other Southern League cities — Chattanooga, Huntsville, Orlando, Memphis, Nashville, Knoxville, etc. — flocked to see the Barons and Jordan when they rolled into town. The Barons still sell Jordan’s No. 45 jersey in their team store. Imagine what they’d do today if Jordan had become a Major League star with the Chicago White Sox.

His debut — April 8, 1994, 25 years ago this week — offered a clue. The Barons made seven errors and lost, 10-3, to the Chattanooga Lookouts that night. Jordan went 0-for-3 and didn’t get his first hit until two nights later. I was one of more than 100 media members who squeezed into The Met’s press box for Jordan’s debut. His postgame press conference — remember, he went hitless and did nothing of note — couldn’t have been larger unless he’d impersonated Reggie Jackson and hit three home runs.

Later that night, I recall sitting in a downtown Birmingham restaurant enjoying a beer with fellow scribes and seeing Jordan and his entourage roll in. It was a scene.

Predictably, Jordan didn’t make the White Sox’s roster that spring and was assigned to Chicago’s Double-A team. He kept trying. Day after day, bus ride after bus ride. Kelsie Heneghan, writing this week at MILB.com, reported on the difficulties then 31-year-old Jordan faced from the Southern League’s pitchers, all of whom were younger than him and having better chances of reaching the show.

From cage work to batting practice to games to postgame with a breaking ball machine, Jordan was hitting five to six times a day. To this day, (then-Barons hitting coach Mike) Barnett has never seen the same work ethic and dedication that Jordan showed that summer. He was a living example of working until your hands bleed.

Barnett saw the hard work and fundamentals that famed UNC coach Dean Smith instilled in him. Jordan expected to do well, but when he went 0-fer, it just fueled him more. Being less than great was unfamiliar territory.

And Jordan was humbled. Baseball won again, as it almost always does.

The following spring, the NBA superstar returned to the Chicago Bulls, his lifelong dream to play baseball ingloriously over. Twenty-five years after their brief fling with Michael Jordan, the Barons have moved to a new stadium in downtown Birmingham. But No. 45 is still there. Probably always will be.