Baseball can’t help itself. One of its leagues, the American, experimented with the designated hitter in 1973 and still hasn’t discarded it. (Thank you, National League.) World Series day games are forbidden. (Thanks for nothing, TV.) And since 1997, interleague play has robbed the game of much of its uniqueness — the superb oddity of seeing an NL club play an AL club; now there’s no uniqueness about it — baseball’s equivalence to a prosecutable offense.

With that, I give you this:

It’s the WGN broadcast of the second game of a Chicago White Sox-Chicago Cubs exhibition series held just before Major League teams resumed play following the 1981 players’ strike. The games were proposed by Chicago Mayor Jane Byrne, with proceeds from the games going to charities. 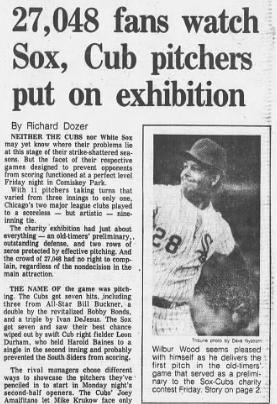 I couldn’t find video of other exhibitions held that summer before play resumed, which was notable enough. But the real joy was watching these Chicago rivals, separated by a few miles and the distinctions of their leagues, play each other during a time when that almost never happened.

That’s not the case now, of course. The Cubs and White Sox play home-and-home series each season thanks to interleague play, and the clubs staged in-season exhibitions (the Windy City Classic) frequently in the years between 1981 and 1997.

Here’s something else, somewhat related:

It’s the telecast of the 1982 Pearson Cup exhibition game between Canada’s two MLB teams, the Toronto Blue Jays and the Montreal Expos. It’s the Expos telecast — in French, naturally — so you’ll have to follow along as best you can.